Light Shining Out of Darkness

Early one cool Monday morning last August, Jeff was meeting with a small group of men for discipleship. One man named Horley asked for prayer for his nephew named Marco. He said, “Marco is not a believer, but I believe he is seeking. I have been sharing the gospel with him and encouraging him to read the Bible.” That day the men’s discipleship group began to pray regularly for Marco.

About two weeks later, we had the privilege of meeting Marco. Jeff took advantage of the opportunity to tell him he wanted to join with his uncle in encouraging him to read the Bible. He also told Marco he would like to hear his thoughts about what he was reading. During that period of time, Jeff had been discouraged by how slow the progress had been in ministry. So Jeff was curious to see how Marco would respond to his challenge.

Not long after we met Marco, he returned to the university where he is studying in Cuenca. It was a pleasant surprise for Jeff that Marco stayed in touch regularly. Every time they talked, Marco had a list of thought-provoking questions that made it clear that he was reading regularly and reflecting on the truth of God’s word. In February, Marco came by our house to talk with Jeff. He said, “I want to thank you for encouraging me to read the Bible. I now understand what it means to be a disciple of Jesus Christ, and I want to follow him and be baptized.” 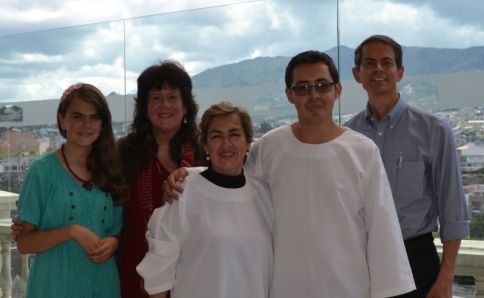 During this same period of time, Terri was studying the Bible with Marco’s mother, Auria. It was exciting to see how each of them discovered the truth of the gospel and made the decision to follow Christ on their own. It was a joy to see them both baptized on February 19th.

This experience reminded us of 2 Corinthians 4:6  For God, who said, “Let light shine out of darkness,” has shone in our hearts to give the light of the knowledge of the glory of God in the face of Jesus Christ.  It is true that there is a lot of resistance to the gospel in Loja. However, it is worth all the time, energy and resources we are investing to see God make light shine out of darkness. Thank you for partnering with us in the harvest through your prayers and financial support!

This entry was posted in Uncategorized. Bookmark the permalink.