Christmas on the Road

This Christmas was truly a Christmas to remember.  Jeff and I were invited to speak at a retreat in Esmeraldas, Ecuador.  We decided to take the whole family, even our spoiled English Cocker, and make some family memories along the way.  It was a grueling 15 hour  trip through mountains, jungle and coast.  However, the opportunity to fellowship with many friends we had not seen for several years made it all worthwhile. 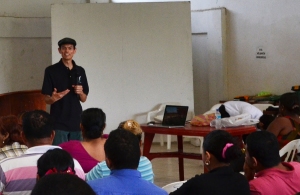 We enjoyed sharing biblical principles for a healthy marriage.  Several couples told us the principles we shared met a very real and present need in their lives.  We even had a few opportunities to counsel people during the retreat.  We also had the privilege of seeing our dear friends Alberto Ayoví and his wife, Mercedes.

As we left Esmeraldas we took a detour through the jungle to a place called Shell.  Shell has traditionally been the jungle outpost where many missionaries came before taking a plane or boat into more remote parts of the jungle.  You may have read about five missionaries who were killed by members of the Waodani (also known as Auca) tribe.  God has blessed us with opportunities to meet some of the family members of the five martyrs.  It has amazed us to see how God has used this tragic event to transform the lives of the Waodani people and lead individuals around the world to serve Him as missionaries.

We had the privilege of spending Christmas day with a grandson of one of the Waodani men who was involved in killing the missionaries that fateful day in 1956.  Gilberto and his wife live in Shell and continue helping the Waodani people to move into the 21st century while maintaining their culture and heritage.  He is overseeing the recording of the New Testament in the language of the Waodani and is instrumental in helping the Ecuadorian government understand the needs of this rural tribe.

The Christmas story is about how Almighty God came to this earth to give His life to redeem people lost and separated from Him.  How inspiring to know five men followed Christ’s example by giving their lives so that the Waodani people might understand what it means to “walk on God’s trail.”  We salute the missionaries who have served this tribe for many years and in many ways.  The story of the Waodani people is a story of forgiveness and transformation.  If you would like to know more, check out the links below.  We can’t think of a better way to spend Christmas!

Steven Curtis Chapman: No Greater Love
Christianity Today article: Did They Have to Die?
Movie: End of the Spear (YouTube)